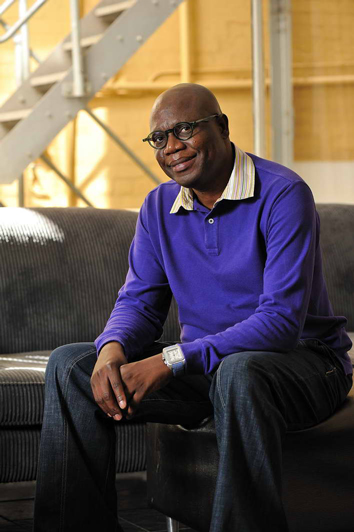 Zwelethu Mthethwa is internationally celebrated for both his colour photographs and his drawings in coloured pastel. Both of these seemingly disparate mediums of expression embody his vivid sense of colour and a pride in his innately African subject matter. They have formed the basis of his appeal and wide acclaim, especially with collectors abroad. Mthethwa’s initial photographic work commenced as a student in the 1980s at the Michaelis School of Fine Art at the University of Cape Town. He had enrolled at the School with special ministerial permission as UCT was then designated by the apartheid State as a “white” tertiary institution. During his period of study, various States of Emergency were declared by the besieged apartheid government, and the “townships’ of Cape Town became no-go zones for white photographers. However, Mthethwa, as a black student photographer, was able to move freely in these areas and make a searing record of the conditions there. It was this photographic work - largely in black and white - that earned him high praise and, ultimately a Fulbright Scholarship to further his studies in the United States. Here he studied for a Master of Fine Arts in Imaging Art at the Rochester Institute of Technology, graduating in 1989.

It was Mthethwa’s study-experience in the USA that brought forth his talent in pastel drawing. He returned to South Africa to develop his skills as colourist; simultaneously exploring the realm of colour photography. Of his pastels the critic Hazel Friedman has observed: “His work is grounded in tradition, yet he imbues it with a riveting contemporary presence. He yanks the viewer through the looking-glass into his painterly planet. It is a world full of possible ‘windows’, yet these openings are flat surfaces soaked in subtly modulated fictions. And his paintings serve as visual songs, their lyrics narrating a story of how painting refers to itself while being fed by experiential nutrients. They serve both as parentheses within the real world and as vividly evocative vignettes of moments, intensely lived.”

Mthethwa was given a lectureship at the Michaelis School of Fine Art between 1994 and 1998 and became a research associate in 2000. He decided, however, to pursue his career as a full-time artist and has since been exhibiting locally and internationally. He was recently the subject of an impressive monograph published by Aperture Press, which specialises in photography.