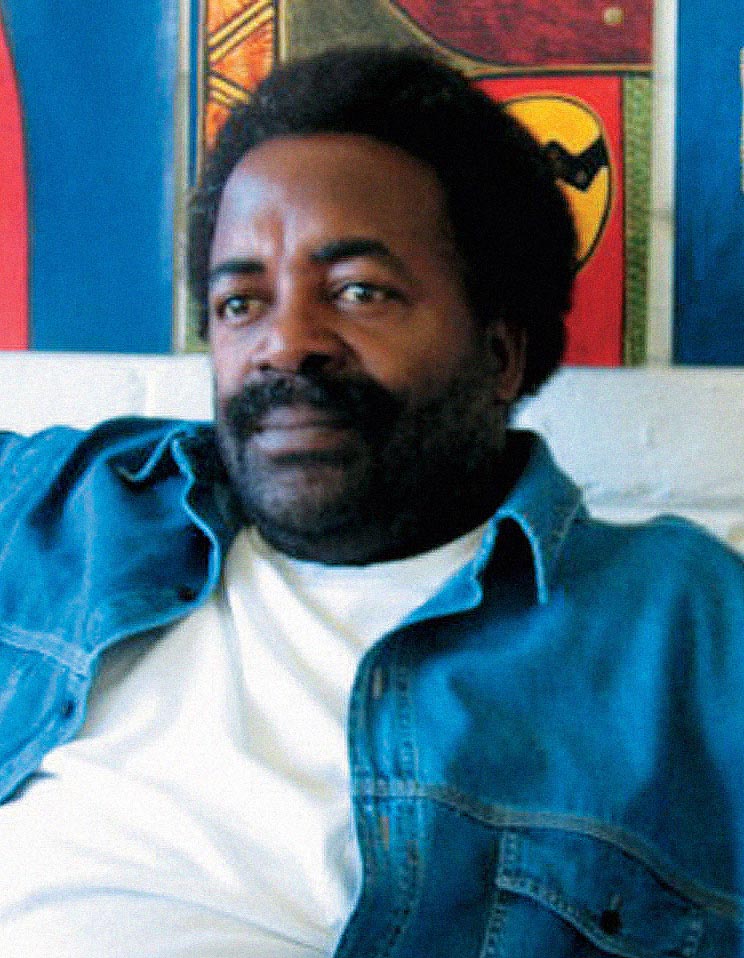 Sfiso Ka-Mkame was born in Clermont, Durban, of Zulu and Xhosa parentage; he still lives in the region and works from his studio in uMkhumbane (Cato Manor) in the same complex where Zamani Makhanya (qv.), Paul Sibisi (qv.) and Lindelani Ngwenya (qv.) also have studios.

He is largely self-taught but his career was promoted by participation in Community Arts Workshops, Abangani Open School and the Thupelo workshops started by David Koloane and Bill Ainslie in Johannesburg in the mid-1980s. Ka-Mkame speaks of them as ‘milestones’ that took his work to another level. His ‘love letters’ of the 1980s were created at the height of the turbulence of the apartheid era in South Africa; the strength of these works gave Ka-Mkame a high profile in South African art. Beyond the struggle and protest themes, he still finds interest in day-to-day struggles that continue to nourish his surfaces. The bold layering of oil pastel colours provides textures of varying depths and sets the tone for the issues that are to be addressed. Comments on social ills and matters of the ancestral spirit world occupy the artist’s mind and with these he delivers work that is at once captivating and engaging.

In 2001 Ka-Mkame was one of the founder members of the Durban collective, 3rd Eye Vision, based at 37 Crart Avenue. During its initial phases Ka-Mkame, Zamani Makhanya and other members held workshops and works like Door of no return (plate 227) and In pain of bondage I feel my being in my womb (plate 226) are the result. The latter title is derived from a poem that Bandile Gumbi, a Durban-based poet and a founder member of the collective scratched onto Ka-Mkame’s working surface; it is a response to the obscure figure that dominates the composition. This work was the result of collaboration between Ka-Mkame and Gumbi and is a synthesis of their ideas.

In Door of no return Ka-Mkame has created a scene about the slave trade in Senegal’s Goree Island where, centuries ago, countless Africans were chained by the neck and forcibly exiled from their homeland for a lifetime of slavery in the Americas. The obscure ambience created by Ka-Mkame captures this moment in time and brings it to the present for our contemplation. In this way, Ka-Mkame has broadened his vision to embrace diasporic concerns.

Earlier works by the artist in the Campbell Smith Collection show his engagement with matters of life, death, survival and the relationships between people. Homage to the children (plate 222) was produced between 1986 and 1987, a decade after the Soweto uprisings and a time when the country was under a state of emergency. The work is dedicated to the children who, concerned about the future of the country, took to the streets in what became one of the heroic incidents of the liberation struggle. Ka-Mkame also touches on issues of conflict within families, showing women as the custodians of culture, and commenting upon painful experiences like losing a child.