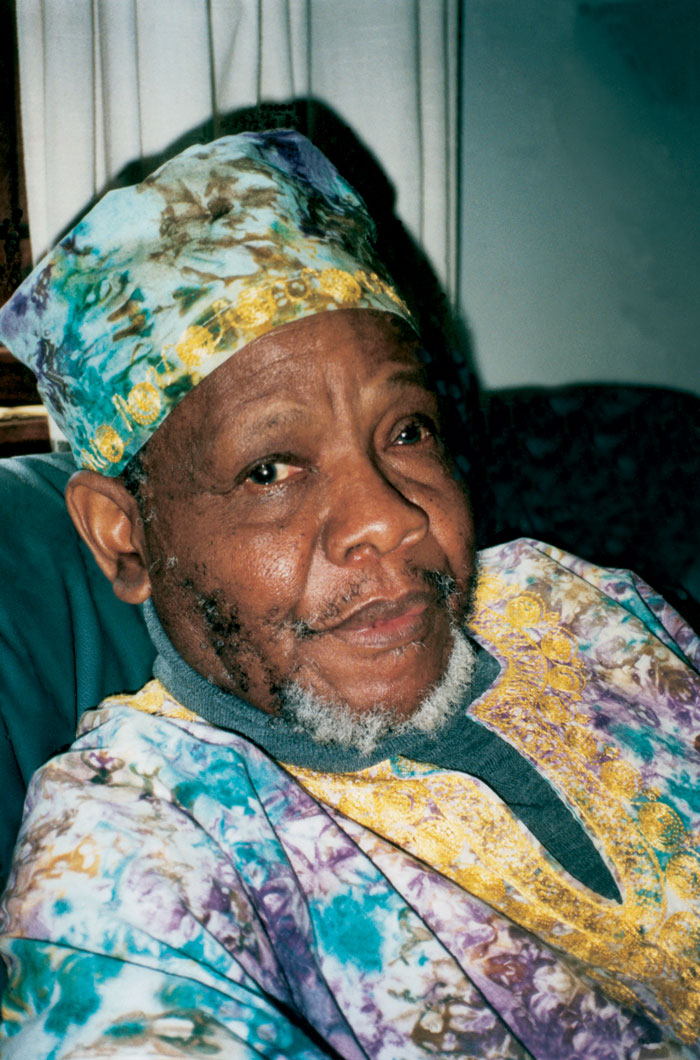 While studying at Rorke’s Drift, Dan Rakgoathe was introduced to a range of influences critical to his future development as an artist. He shared much in common with the approach of Cyprian Shilakoe (qv.) as far as his subject matter is concerned but unlike Shilakoe, who preferred to work in intaglio, Rakgoathe concentrated almost exclusively on linocuts. The linocuts of Azaria Mbatha (qv.) also influenced Rakgoathe in terms of technique and design, but it was the work of the little-known artist Muziwezi Xhala Tabete (born 1925) that had the greatest influence on him. At least one of Rakgoathe`s prints is actually closely based on a work by Tabete. Rakgoathe felt that Tabete expressed an African spirituality which he himself was to seek in his own visionary images.

In all his work Rakgoathe tried to capture what he described as the ‘Spirit of Creation’. Rakgoathe’s vision and approach is well illustrated in Maternal anxiety (plate 192), a linocut of 1973. It is a vision not of the outer world but an inner one. The mother is seen as an archetype rather than as an individual, the other stylised figures extending this vision of an inner world. The theme of anxiety is intensified by the compressed space of the composition, akin to the compressed space of the womb; this is echoed by the foetal position of the main figure. Heightening the sense of anxiety in this haunting, obsessive image is the ghost-like figure in a complementary position to the figure of the mother. The power of this work is also discernible in the fact that the beautifully designed decorative elements are not merely ornamental but form a vital, integral part of the whole.

Rakgoathe’s primary interest was in the linocut, so his etching Initiation ritual (plate 31) is, in terms of its medium, fairly unusual. This work appears to reflect many aspects of his Northern Sotho or Pedi heritage. In this image, a centralised female figure stands with both hands raised. She looks down at her breasts, which produce life-giving milk. Her facial features suggest an African mask. Above her float three circular shapes which seem to be the moon in its various phases; a reference, most likely to the monthly cycle of menstruation. In front of her stands what appears to be a masked female initiate who holds her transparent belly. A crowd of ritualistic beings in the background looks on.

The central figure in Initiation ritual is virtually identical to that in Rakgoathe’s linocut entitled Rain Queen (1973) (Fig. 6). This print was based on the legend of Modjadji which Rakgoathe had learned from his grandmother. This Rain Queen is a fertility figure, an earth mother from whose breasts flow nourishment for all living things. Rakgoathe was highly attuned to the feminine, and guardedly admitted once to his belief that in one of his previous lives he had been incarnated as a young girl who had died at the age of thirteen. To this he attributed his awareness and sensitivity to the special talents, needs and problems of women in the world.1

Rakgoathe’s etching Initiation ritual can thus be read as a celebration of the centrality of the feminine role in the cycle of life. While pubescent boys undergo a ritual circumcision so that they can enter into adulthood, in the case of Northern Sotho and Pedi girls the initiation takes longer. The initiation takes place when the young woman experiences her first menstrual cycle, and this fact is divulged to the senior women. Each girl undergoes her own initiation, but has to attend and take part in the rituals of a number of other girls as part of this process. This whole process is supervised by full initiates, who are ultimately under the authority of an old woman who has been chosen by the initiate as her ritual ‘mother’. This role cannot be taken by the girl’s natural mother, who is forbidden to enter the ‘hut of seclusion’ and who cannot intervene during some of the trials and tribulations that the initiate is put through by her elders. Much advice concerning sexual activity, her future relations with men and proper behaviour to towards her elders is dispensed at this time. When she has been through the number of required ceremonies, she is finally presented to the most senior woman in the district to be beaten with a stick as a sign of her new status as a woman. Rakgoathe’s Initiation ritual is a work of technical complexity and layered mystery that allows us a glimpse into the sacred arena of Northern Sotho and Pedi belief and tradition.2