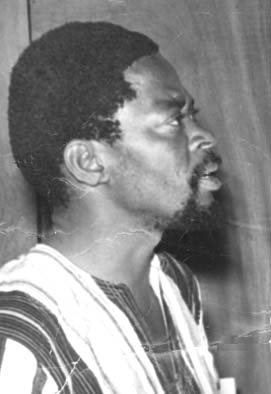 Ezrom Legae was educated at St Cyprians Primary School and Madibane High in Diepkloof, Soweto. He studied at the Polly Street and Jubilee Art Centres between 1959 and 1964 under Cecil Skotnes (qv.) and Sydney Kumalo (qv.). On the latter’s retirement in 1964, Legae was appointed art instructor at Jubilee Art Centre, later becoming co-director of that institution. In 1970, Legae was awarded a USSALEP travel scholarship, which funded travel and study in the US and Europe. From 1972 to 1974, he was director of the art programme at the African Music and Drama Association, before leaving the educational environment to become a full-time practising artist. In 1980 and 1981, he worked as a part-time instructor at the Federated Union of Black Artists (FUBA), and was Director of the Diepmeadow Town Council Art project until his death in 1999.

Perhaps more than any other artist associated with the Polly Street milieu, Legae’s practice as an artist is absolutely convincingly located at a cusp between African sensibility and reference on one hand, and the transcendent and universalist preoccupations of international modernism on the other. In this regard, many of his sculptures register equally the kind of abstractionist simplification of European and American figurative sculpture of the mid 20th century and the hieratic and animist charge and proportion of African traditional woodcarving. It is however his drawings and graphics from the 1970s on which his reputation rests most strongly today. In sustained exploration of themes like his series of conjoined animal and human forms, and his 1978 Chicken series, Legae generates an animist language of form in which the deferred and disembodied violence of representation, and evocation of primal passion and dislocated suffering, creates images that are memorably adequate in iconising the political consciousness of the times.