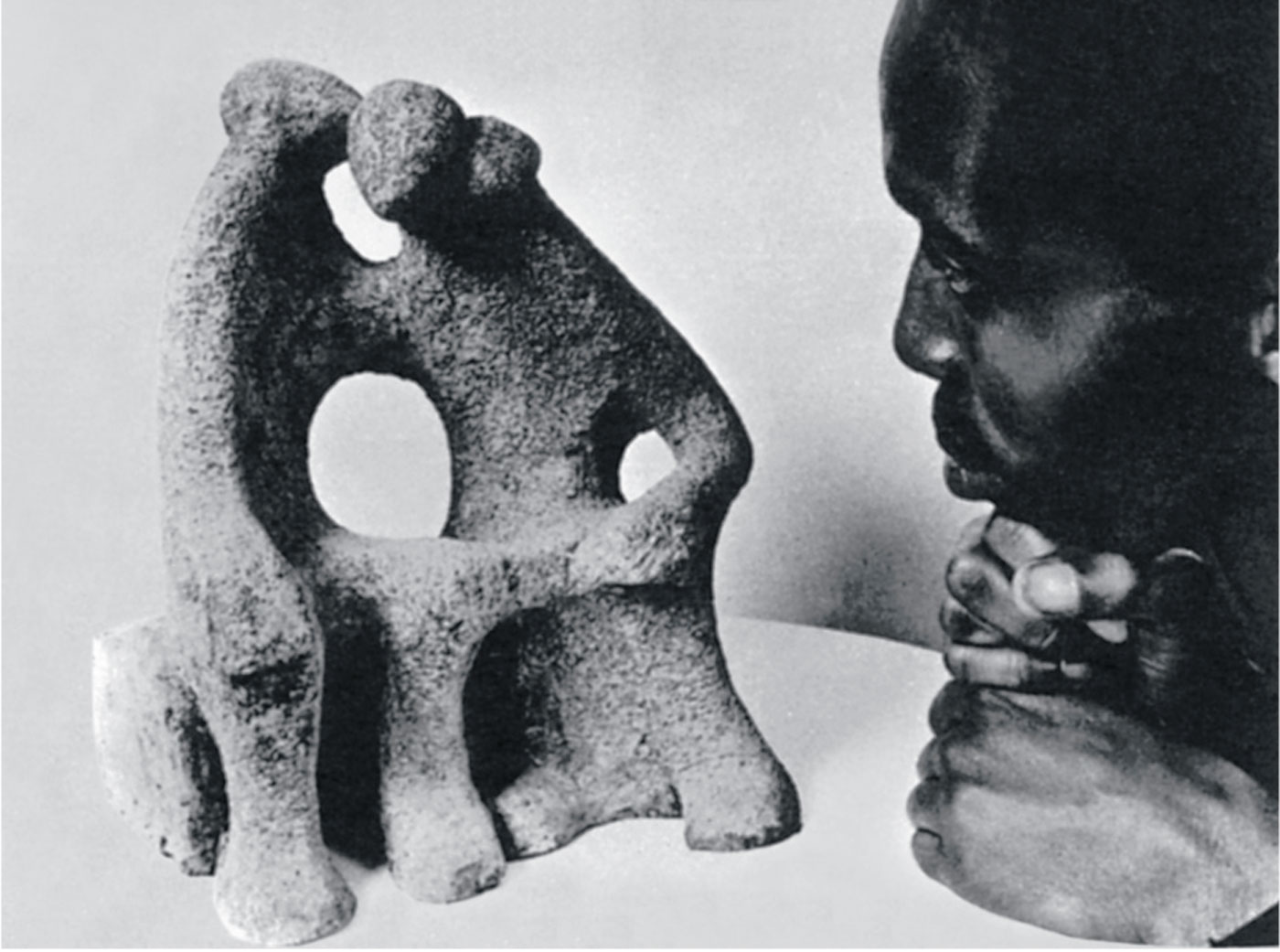 Winston Saoli’s father, the Rev. Russell Saoli, was the headmaster of the Arthurseat Lower Primary School in Acornhoek when Winston was born in 1950. He was the second of six children. Saoli’s education began at his father’s school and he attended the Morris Isaacson School in Moroka when the family moved to Soweto in 1963. Here he was exposed to a variety of influences, and opportunities became available for him to develop his talent. The first artist to encourage and mentor him was Ephraim Ngatane (1938–1971) (qv.). Bill Hart of the Jubilee Art Centre recalls his and Ezrom Legae’s (qv.) first meeting with Saoli in July 1968, when he showed them his work with a view to enrolling at the Centre. Hart recalled:

The work Winston brought to show us did not have Ezrom Legae and me doing handstands and frothing at the mouth but, in his favour (unlike so many aspiring young black artists) he was not trying to pass off copies from comics, or any other source, as his own work … obviously the talent was there, just waiting to blossom.1

It was a surprising testament to Saoli’s determination and hard work, as well as the encouragement of his teachers, that within a year his work had improved so markedly that he was given his first solo exhibition at the Goodman Gallery in Johannesburg. It was a sell-out, and in the same year his work was featured on the Contemporary African Art exhibition at the Camden Arts Centre in London. At the age of only 19 years a successful artistic career seemed assured, and he was even showing a tentative interest in sculpture. Pies (1969) (plate 176) in the Campbell Smith Collection, dates from this important period in his career. In 1971 Bill Hart defined the unique qualities of Saoli’s work as follows:

Winston is a prime example of creative spontaneity. The significance of his work has not the ‘dominating intensity’ of predecessor, Dumile, who raged against the socio-economic atmosphere of poverty and misfortune. Winston draws with the eye of the poet … his sensitivity of touch is one of his finest characteristics.2

Although Hart’s observations are apt in terms of Saoli’s early work, it changed markedly as his career unfolded. His early phase showed a concentration on scenes and figures from his immediate environment, with the imprint of his mentors Ngatane (qv.), Legae (qv.), Skotnes (qv.) and Hart, in evidence. A radical shift occurred in Saoli’s life in late 1972 when he was arrested as an ANC associate, allegedly through his participation in clandestine ANC meetings on the campus of Wits University. He was held in solitary confinement for nine months without trial. The consequence of this on his art was negative and he was unable to readjust to a normal life afterwards. Alcoholism became a problem, and he began to periodically live the life of a vagrant. At certain times, however, he managed to produce good work and participated in group shows locally and overseas.

The potential of the ‘poetic sensibilities’ that Hart sensed in his early work were pushed in more commercial directions, prompted no doubt by his studying commercial art after his release from prison. His work, vacillating between different influences, then moved completely away from the influences and style of his Jubliee Art Centre mentors. His mixed-media abstractions, using brighter, primary colours and a translucent layering of shapes and linear, figurative elements, resulted in works of a pseudo-mystical nature, which commercial galleries now punt as his finest work.

In 1992 Saoli’s alliance with the artist Peter Sibeko, who ran the Soweto Gallery, brightened his prospects but continued what can only be termed as his trajectory of artistic decline. This was speeded, perhaps, by the extravagant praise of his work generated in circles keen to commercialise his reputation with sympathetic art-buying tourists. In 1993, on the eve of the advent of a new dispensation in South Africa, Saoli was diagnosed with cancer. He died on 20 May 1995, alone and destitute, in many ways a victim of the political, social and market forces that have blighted and exploited so many promising artistic careers in this country.