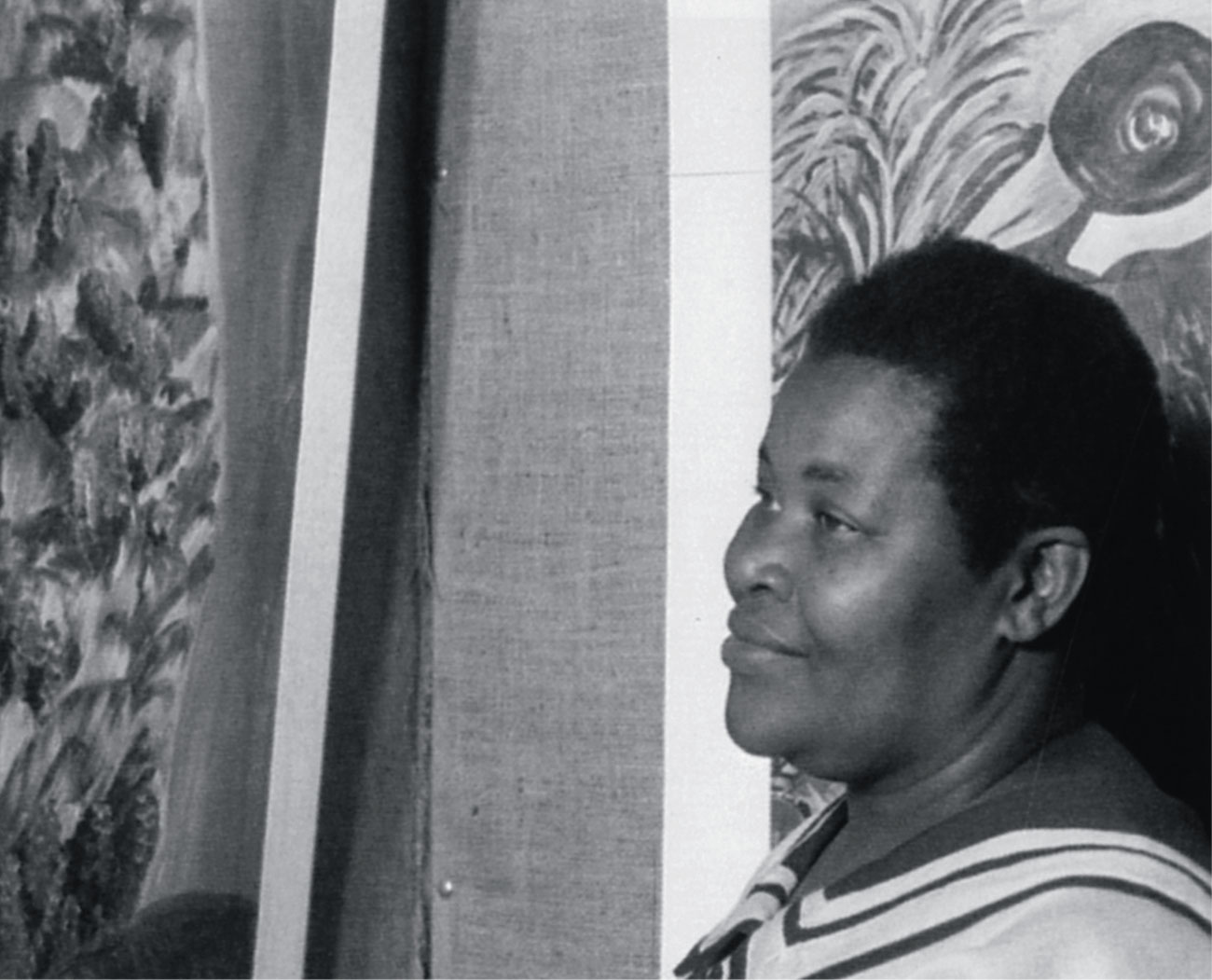 Gladys Mgudlandlu lost her own mother at an early age and her first 12 years were spent with her grandmother. In 1957, at the age of forty – the same year as the death of the grandmother, who had taught her to paint murals as a young girl and instilled in her a love of Fingo and Xhosa tradition – Gladys Mgudlandlu began to paint seriously. She enjoyed success and recognition from the beginning, holding her first solo exhibition in 1961. Part of her rich heritage was the bird lore of the Eastern Province. Mgudlandlu knew much about the bird-life of the region, and referred to birds in an intimate manner, calling them her ‘friends’. She herself was called unontaka or ‘the bird lady’. Interviewed once by a journalist she remarked:

Birds have always been my companions. I am a very lonely person. They are the only real friends that I have had. Sometimes I think I should have been a bird. I even paint like a bird. You will notice that all my landscapes are done from a bird’s view, high up and far away.1

In 1941 Gladys qualified as a Lower Primary School teacher at the Lovedale College in Alice. Later, as a teacher, she would often relate her grandmother’s stories and folklore to her pupils. After coming to Cape Town, Mgudlandlu registered as a nurse and practised at the Brooklyn Chest Hospital. But from 1948 on she returned to teaching, first at the Athlone Bantu School and from 1953 at Nyanga West Primary School. After school she painted at night and by force of circumstance worked by the light of a paraffin lamp. However, even when she finally had access to electricity she continued to paint by lamplight, using its particular cast of light and the flickering of shadows to good effect.

In her paintings Mgudlandlu often used several viewpoints – one from ground level when depicting animals – and another from a high vantage point in her landscapes as in Suburbs with Table Mountain (plate 94). As a child she had often climbed the rock of the Xhosa mystic and seer, Ntsikana, and would gaze out over the landscape from that high vantage point. Although she received no formal training she received advice and encouragement from artists like Marjorie Wallace and Katrine Harries. After she began painting views of what were then designated as ‘white’ areas, Ray Alexander Simons (1913–2004), the national secretary of the Federation of South African Women and noted trade unionist, encouraged her to paint scenes of Langa, Gugulethu and Nyanga. In her paintings of these areas Gladys captured the windswept aridity and desolation of dwellings placed among the sandy hills of the Cape Flats. These houses stand in sharp contrast to her depictions of dwellings dating from her childhood in the Eastern Cape, such as in Huts, (plate 96) painted in 1966. Here she remembered the sacred and protective power of the colour white, which she used conscientiously when painting the surrounds of the doors and windows. Although Gladys was severely criticised by certain black writers for what was termed her ‘escapist’ art, her paintings of ‘township’ scenes in fact depict the grim realities of life there and an innocence now lost. These stand in sharp contrast to a painting such as Huts, which seems, by comparison, to be an idyllic picture of a childhood Eden.