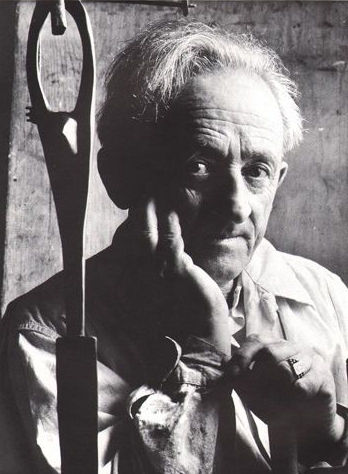 Although the name of Lippy Lipshitz is synonymous with South African sculpture, it is little-known that he produced a small body of paintings. As a sculptor, and like many other sculptors of note, he felt drawn to drawing and graphic media in preference to paint. He thus made many small works on paper in the form of monotype prints, woodcuts and pastel drawings. Room to let is a work of 1961, produced when he was teaching at the Michaelis School of Fine Art at the University of Cape Town. Judging by the dress of the figures in it, it seems to be a scene in Cape Town’s ‘Malay Quarter’.

What is noticeable in this drawing is Lipshitz’s sculptural sensibility at work in the two main female figures on the left. Their bodies appear to almost merge, creating a ‘closed form’ which contains the germ or idea for a possible sculpture. Looking at the artist’s sculptures, a fair number of which are made of paired figures, such as Jacob wrestling with the angel (Iziko SA National Gallery) makes this point clear. The unfinished ‘look’, as well as the quick and immediate handling of the pastel medium demonstrates Lipshitz’s concern with the essence of the underlying form and abstract idea.