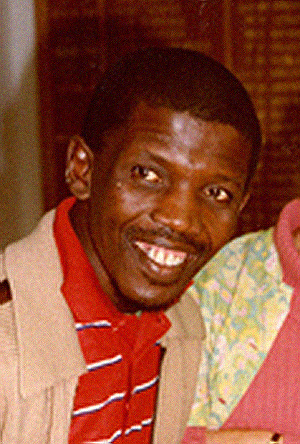 Welcome Mandla Koboka works in most of the media associated with drawing and painting. His subject matter is mostly drawn from the daily life in the ‘townships’, but in this watercolour of 1978 (plate 24) he resorts to a subject that has clear associations with the political struggle in South Africa. The prisoner is a spontaneous watercolour painting executed over an underlying drawing. The subject is presented in a simple and clear manner; the prison bars to the top left, and the chains attached to the figure’s left wrist leave us in no doubt as to what is represented.

The figure’s large and expressive hands seem clasped in prayer. They seem to remind us of Albrecht Dürer’s drawing of the same subject made in 1508, and popularised in many forms in religious and domestic contexts. The prisoner himself bows his head as if in prayer, making this seem a work that deals with the acceptance of martyrdom and heroism rather than one of agonising, angry protest. Koboka has taught art at FUBA and in Orlando, Soweto, and has been very concerned to transmit his learning and skills to the next generation.