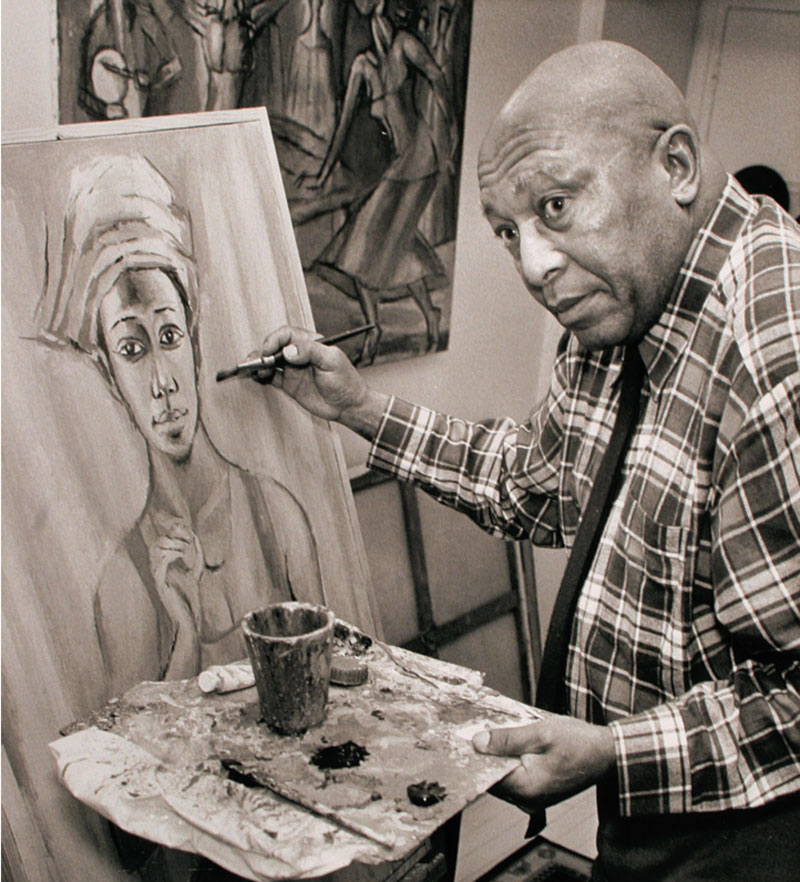 After graduating as a teacher in 1938, Gerard Sekoto taught at the Khaiso School, an Anglican institution situated near Polokwane (Pietersburg). While there, Ernest Mancoba (1904–2002), a colleague, encouraged Sekoto to go to Paris to further his career as an artist. Mancoba himself left for Paris soon afterwards. However, Sekoto decided to stay for a while longer in South Africa to broaden his experience of the country and to develop himself further as an artist. Interestingly, quite a different point of view was held by another artist represented in the Campbell Smith Collection, John Koenakeefe Mohl (1903–1985), (qv.). Contrary to Mancoba’s advice, Mohl urged Sekoto to stay in South Africa as the country needed black artists ‘who could paint our people, our way of life, our way of living, not speaking in the spirit of apartheid or submission’.1 Mohl also felt that Sekoto would be cutting off his true source of inspiration by going to Paris. Ultimately, after careful deliberation, Sekoto did indeed take the decision to go to Paris. But first, in carrying out his plan, he left teaching at the end of 1938 and went to Sophiatown where he began to work as a full-time artist. In 1942 he moved to District Six in Cape Town. Here he apparently met George Pemba (1912–2001), (qv.) who was visiting from Port Elizabeth. Finally, in 1945, he moved to Eastwood, Pretoria.

One of Sekoto’s most important paintings from his Eastwood period is The artist’s mother and stepfather (plate 58). Gerard Sekoto’s mother, Anna (neé Serote) had married Paulus Jiyane after the death of her first husband in 1938. The couple later moved to live in Eastwood. At that time Sekoto was residing in District Six in Cape Town with the Manuel family. As indicated above, Sekoto left Cape Town for Eastwood and went to live with his mother and stepfather. His Eastwood period is regarded by many as the high-point of his art. His already-adventurous palette expanded even further, and bright colours like pinks, purples and greens – previously excluded from his very restricted colour range – were employed. Like virtually all of his representations of ‘township’ life, Sekoto`s portraits were rarely confrontational.

Fully frontal portraits of people are in fact rare in Sekoto’s oeuvre. In his portrait of his mother and stepfather, he obviously felt at ease in depicting people that he knew and loved. Both parents are rendered in casual, yet dignified poses. The figure of his mother, with whom we are familiar from other portraits, is rendered with both affection and empathy. The depiction of his stepfather, caught in a moment while drinking his tea, is rendered with equal sympathy. Everything in the painting speaks of simple domesticity. Evident also is Sekoto’s assured handling of his medium and his mastery of tone, colour and composition. This work reveals Sekoto at the very height of his expertise. Completed just before the artist’s imminent departure for Paris, this is an image of domestic contentment – a contentment that Sekoto himself was not to enjoy for many years after his arrival in the French capital in 1947.

Sekoto gave this small painting, Femme en rouge (Girl in red) (plate 7) to his friend Yvonne Nouet as a gift over the festive season of 1948/1949 during his first year in post-war Paris. It is well known that he suffered from the cold in his tiny apartment, which allowed him little latitude to paint. This could account for the small scale of this painting. Sekoto was then unable to speak French. He was also soon forced to stop classes at the Grande Chaumiére and take a job in order to survive. Nouet was herself a refugee from Romania who helped others to find shelter and food. She introduced Sekoto to her circle and they became good friends. In appreciation Sekoto gave her this oil painting and a pastel drawing of a street scene.

By late 1948 Sekoto had produced 25 paintings for his first exhibition at Colonial House in Paris. Only two were sold – to the South African attaché and his daughter. Used to the success he had enjoyed in South Africa before he left, he was devastated. He persevered and showed again in March 1949 at Gallerie Else-Clausen, selling only three paintings. He became depressed, drank excessively and considered giving up painting. This led to his breakdown, attempted suicide and his admission to a psychiatric institution, by July 1949. These events give some idea of the fragility of Sekoto’s psyche. Little evidence of his artistic output during this formative Parisian period exists. The subject of this small painting appears to be a gypsy or street urchin displaced by the war and Sekoto’s rendering was no doubt influenced by his own sense of dislocation and hardship. It seems quite distinct from the his portrait heads of the later 1950s, which appear stylized and generic by comparison. This small work is rendered with an economy of colour in complementary tones altogether dissimilar from his Eastwood period in South Africa. Its limited palette suggests a lack of a wider range of oil colours, which in the post-war period must have been expensive and difficult to obtain. It also seems dissimilar to the scenes of ‘township’ life that Sekoto painted from memory after he was discharged from the psychiatric hospital.