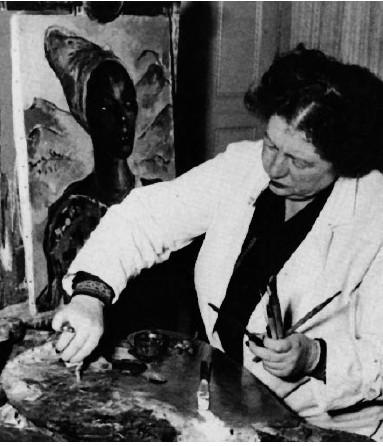 Irma Stern is still considered to be South Africa’s foremost artist in terms of public recognition and the record prices that her works fetch at an auction.1 At first misunderstood for her highly individual and Modernist style by the conservative and shockable public of Cape Town, she gradually won acceptance and eventually acclaim. Her strong interest in portraying black people was also a point of public controversy, especially in the 1930s. Deeper scrutiny of this aspect of her work has occurred in the past 15 years in the light of developments in feminist and gender studies, and the new post-colonial discourses.2

While many other white South African artists of the period – the majority of them women – such as Dorothy Kay, Barbara Tyrrell (qv.), Constance Greaves and Joyce McCrea – were essentially realist painters with an interest in ‘native studies’, Stern’s approach to the same subjects was different, with the result that she cannot be called a true ‘ethnographic’ artist. Her highly personal style and her clear interest in the expressive potential of her medium tended to overwhelm the individuality and particularity of her subjects. In common with the latter artists, however, she also tended, when it came to portraying an African sitter, to have little or no interest in recording their names. Her interest, and theirs, lay in the appearance of the exotic ‘other’. In common with her German Expressionist antecedents, Stern’s concern was with a fantasy of unspoiled ‘nature’ and her projection of what she termed the ‘soul of Africa’. As she once stated: ‘It is only through personal contact that one can get a few glimpses into the hidden depths of the primitive and childlike yet rich soul of the native and this soul is what I try to reflect in my pictures of South Africa’.3 As Marion Arnold observes in her monograph on the artist:

Many of Stern’s paintings of people from other cultures are concerned primarily with the culture rather than the individual. The essence of the person studied becomes a generalisation for the society because, although the painting is created from contact with particular models, Stern interprets according to a mental construct about the culture of origin. Thus many of her portraits are ambivalent, presenting both stereotypical and individual characteristics.4

For these artists of the ‘native study’ school, theirs was merely an attempt to record for posterity the literal appearance of a vanishing traditional African lifestyle.

This work by Stern in charcoal, gouache and watercolour in the Campbell Smith Collection (plate 13) is signed and dated 1933. In the first half of that year, aside from her May exhibitions in Johannesburg and Pretoria, the artist made a trip to Swaziland, where this portrait of a young black woman with heavy-lidded eyes was most likely produced. The reworking of areas of the head and face in blue and black gouache and the additions of watercolour in the background could well have been undertaken in her studio after the initial drawing was completed in the field. On Stern’s return to Cape Town she complained in a Cape Argus interview that:

It was a shock to me to see how the natural picturesqueness of the native in his kraal had almost disappeared … Today he has submitted to civilization … he wears Everyman’s clothes and boots. He looks odd and drab in this garb … to those of us who saw the beauty of the native in his natural state the change is sad.5

The ‘sad change’ in the conditions of ‘native’ life that Stern complained about were the direct result of the unfolding impact of colonialism in southern Africa. The destruction of her fantasy of the ‘unspoiled’ and ‘natural’ life of her African subjects resulted not in indignation on behalf of the very same ‘natives’, but at the disruption of her needs as an artist. It is at this moment, as Marion Arnold notes, that she begins to look northward to Zanzibar and the Congo for new sources of the unspoiled and the exotic.6

Debate on the problems raised by Stern’s representations of indigenous South Africans is not the sole prerogative of critics in the post-colonial era. Reservations on this aspect of her work were raised and published as early as 1935. Commenting on Stern’s tendency to create what he termed ‘idyls [sic] of the Black’, Richard Feldman wrote as follows:

She is little concerned with the native away from his natural surroundings. She has not yet seen the proud Zulu as kitchen boy, the joyful Swazi broken in spirit as he emerges from the bowels of the earth, the mighty Basuto as a beast of burden … we may hope that greater work will emerge from her brush should she turn from the maidens of Pondoland to the hard-worked girls of District Six of Cape Town, from the green hills of Swaziland to the Mine Dumps of the Witwatersrand.7