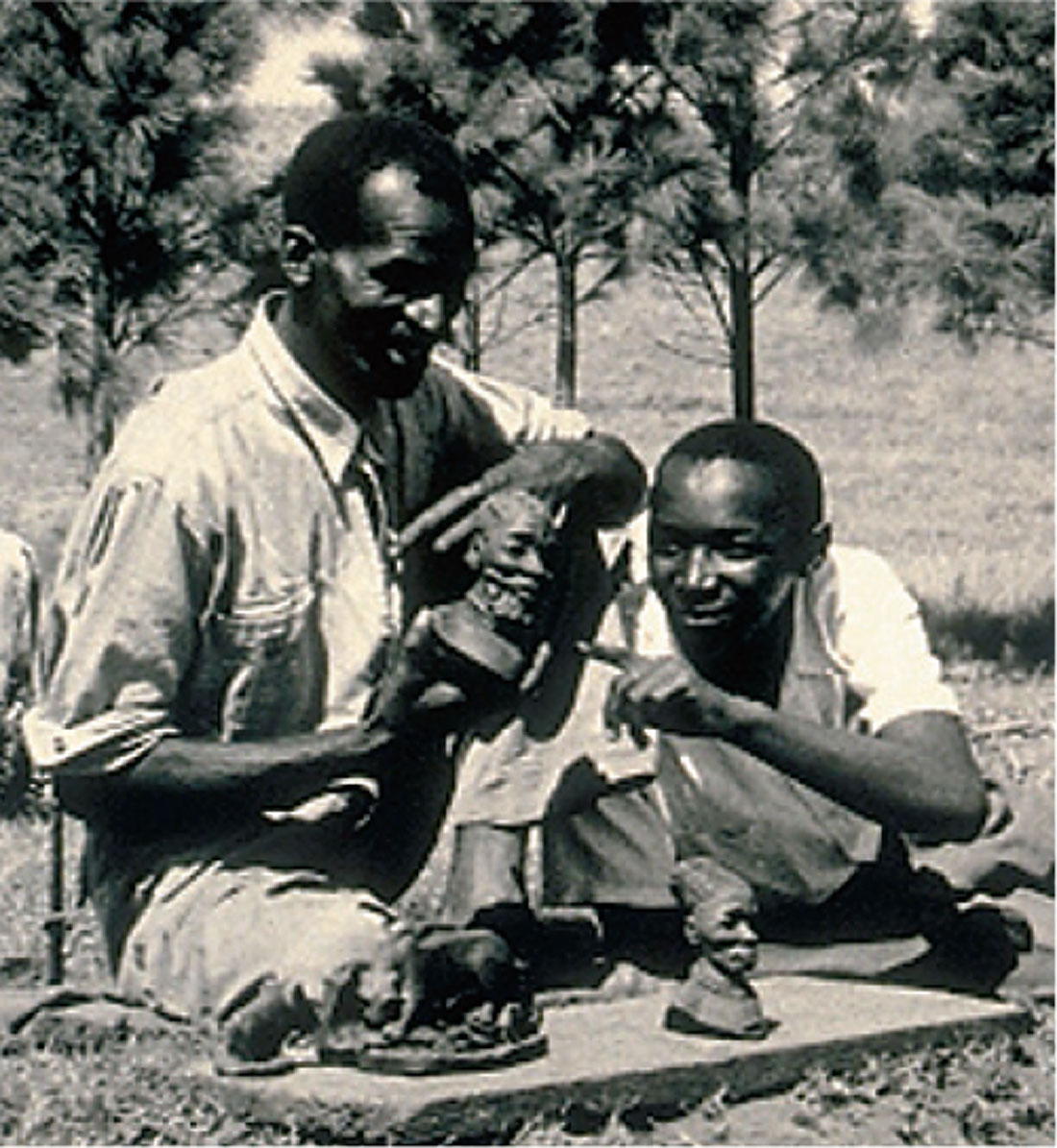 Nguni cattle and Zulu men and women. These small figures were well-known in the Eshowe area for some 40 years prior to Ntuli’s death and were collected by local residents, tourists and notable personalities in South Africa’s colonial administration. His remarkable talents had been noticed when he was only seventeen by Dr John Holloway of the Native Economic Commission in Natal. Holloway was of the opinion that Ntuli should not receive any formal art training, for fear that it would destroy his ‘uncanny instinct for putting life into his models’.1 ‘Whatever may be the future of Hezekiel’, another source remarks, ‘there is no doubt that his work does bear the stamp of genius. His leopard in a tree, ready to spring, breathes vitality.’2 It is not possible to identify this small sculpture of a leopard in a tree in the Campbell Smith Collection (plate 29) as that which Holloway refers to, since many similar ones were made. The denial of formal art training to Ntuli for fear of ‘spoiling innate, natural talent’ echoes the situation of Gerard Bhengu (qv.), and highlights the short-sightedness of colonial paternalists like Holloway.

In 1931 as many as 71 of Ntuli’s sculptures were donated to the Natal Museum in Pietermaritzburg, making him one of the first black artists in KwaZulu-Natal to be identifiable by his own name in a public collection. Mention of this collection was overlooked in Steven Sack’s catalogue for The Neglected Tradition, published in 1988.3 Ntuli was reportedly ‘discovered’ by the donor of this collection, a certain Stanley Williams, who met Ntuli in Pietermaritzburg’s town centre in 1929 when the latter was trying to sell his small clay sculptures to passing white pedestrians.

Williams became Ntuli’s first serious patron, facilitating his indenture with the Department of Native Affairs to make clay sculptures; this allowing the artist to continue marketing his work in a white area, and avoiding the fate of other hawkers who were routinely removed from the streets. Anecdotes about the supposedly beneficial effect of Williams’s mentorship of Ntuli appeared in an article published in Die Huisgenoot in March, 1931:

His master, Mr Stanley Williams told me that in the beginning Hezekieli [sic] believed that he was doing him a favour every day by producing a large number of figures. One day he made seven lions, in every possible pose. His master paid him for the seven sculptures, and then in front of Ntuli, destroyed six of them. The young Zulu could not grasp the strange behaviour of his white master. Terribly upset, he crept away to the kitchen at the back of the house, and cried bitterly. But when Williams explained that it was not the quantity but the quality of the works that was important, Hezekiel’s eyes were opened. With fresh hope, the black artist returned to his work at the Natal Museum where he spends hours and hours daily in front of the glass cases studying the stuffed animals from his native land.4

Despite his apparent concern for quality in Ntuli’s work, Williams also had a clear eye on profit for himself, for the same article reports his plan to get a Durban-based firm involved in the bronze-casting of 100 Ntuli sculptures for wider colonial consumption.5 In the longer term his relationship was apparently not of great financial benefit to Ntuli and it ended at some indeterminate point.

What appealed to colonial admirers of Ntuli’s work was the compellingly life-like appearance of his animal pieces in particular, even if the handling of facial details was sometimes considered awkward.6 The artist’s reputation in white society was enhanced by his winning the first prize at the Royal Agricultural Show in Pietermaritzburg in June, 1930. This attracted the attention of such personalities as the Countess of Athlone, wife of the ex-Governor of the Union of South Africa, who purchased his work. He was also presented to King George VI on the royal visit to South Africa in 1947, and again to the royal party when he was a resident artist at the Rhodes Centenary Festival of 1953 in Bulawayo, Southern Rhodesia (now Zimbabwe).

Ntuli used similar clay to that employed by Zulu domestic potters, traditionally women who made beer containers for home use. It was dark and gravelly clay which came from specific sources. His sculptures were modelled from solid lumps of clay and did not use the traditional coil techniques normally used by potters. Also unlike the potters, he preferred to leave his pieces unfired. He treated their surfaces with certain finishes, ranging from applying clay slips to colour in the form of commercial enamel paints and black ink. Sometimes, as in the case of the spotted skin of a leopard, as seen here, or in the case of the variegated hides of Nguni cattle, he used paint layers followed by a varnish. This had the effect of bonding the unfired clay surface and accounts for the rather good condition of his pieces after many years.7