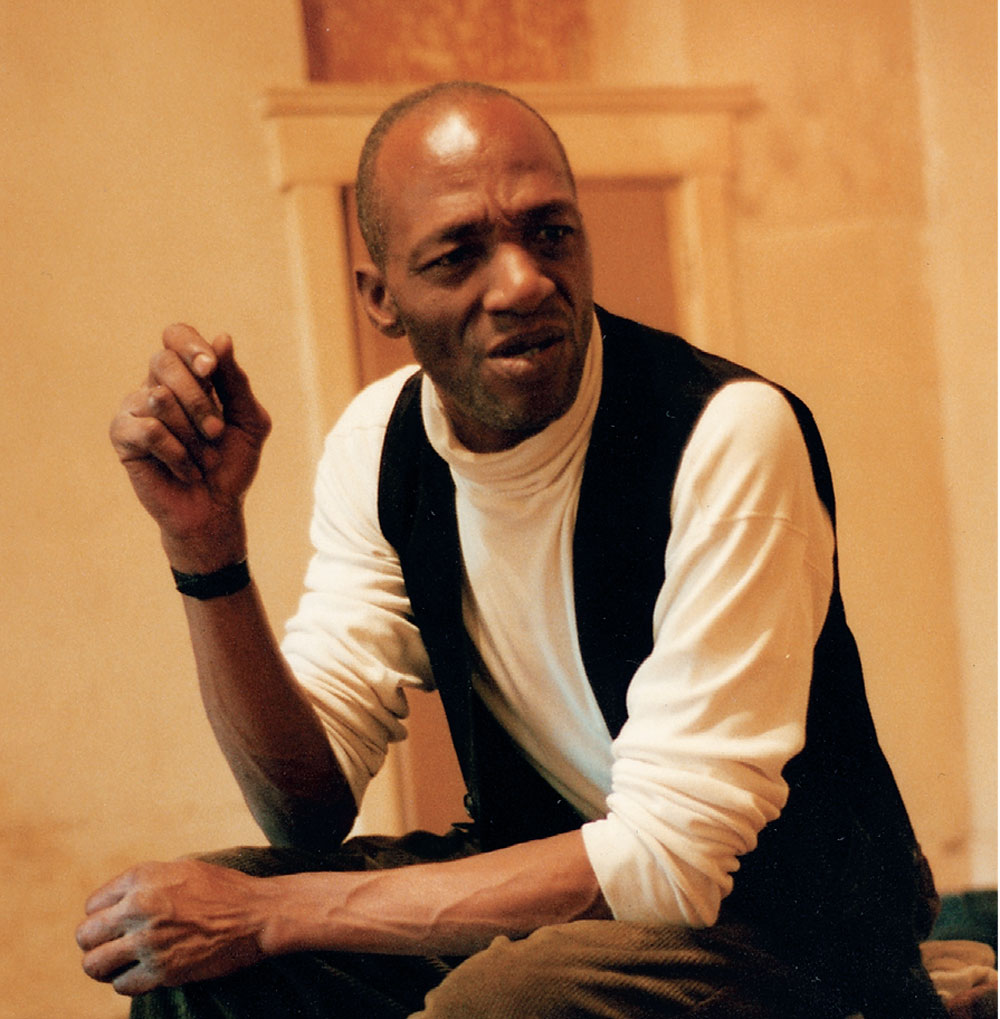 A somewhat solitary figure, Alfred Thoba regards himself as a self-taught artist although there is evidence that he had some brief tutelage in Swaziland and later under Bill Ainslie (1934–1989) in Johannesburg. Acknowledging this in an interview in 1990, he remarked that ‘I went to them with the knowledge; I was actually born with it’.1 He started painting full-time in 1974 after working for several advertising companies. At first concerned with erotic love in his paintings, a theme which he continues to revisit; the tenor of the times in South Africa caused him to switch to overtly political subjects. 1976 Riots, (oil on board) was exhibited at the Market Gallery’s 100 Artists Protest Detention without Trial Exhibition in 1988, organised by the Detainees’ Parents Support Committee. This key work immediately garnered him much attention and led to his inclusion in Sue Williamson’s populist anthology Resistance Art in South Africa, published in 1989.2 He entered the collection of the Iziko SA National Gallery when his painting My Private Love Affair (1991) (oil on cardboard) was acquired in 1994.

Thoba’s works are largely painted in oil on canvas applied to board or oil on paper. Their surfaces are smooth and are highly worked despite the apparent informality of his drawing. The artist has commented on the difficulty of achieving such surfaces: ‘I would start to work on it and it fought back. A painting pushes the artist away, and the artist has to fight to be admitted into the painting’.3 When he uses the more rigid surface of board as a painting support, he often uses thicker paint and introduces contrasting textured areas. This adds an important dimension which is unfortunately lost in photographic reproduction. Thoba’s use of flat areas of colour, a shallow illusion of space, overlapping of flattened repetitive forms, light and dark contrasts and mixed perspective, all within the same work, might define his style as that of an artist working within the ‘naïve’ tradition. If it is within such a tradition, then it lacks the lightness and superficiality of intent that normally characterises such work. The earlier erotic and politically-inspired work carries with it a genuine sense of feeling than can be highly evocative.

However, since 1994, a serious moralising intent has become a feature of his later work, and this trend is discernible in those examples in the Campbell Smith Collection, all dating from the period 1996 to 2004. These show a dark and deepening obsession with social, sexual and religious issues. The titles of these particular works are taken from the preambles to written statements that Thoba issued on each work when they were purchased. The large work entitled Wishcruft evil have entered in the church house (sic), (1996) (plate 245) appears to deal with the conflict between Christianity and traditional African religious belief, the church associating ‘witchcraft’ with South Africa’s black communities. Spirituated human beings of God should campaign evil beings to God (sic), (2002) (plate 244) shows a preacher addressing a church gathering. He holds a text which lists the ‘sins’ of abortion and homosexuality. Thoba’s own thoughts in the accompanying statement are an expression of bewilderment about these and other related issues such as prostitution, incest, and muthi practices in an evolving black milieu where the implications of South Africa’s new Constitution are unfolding against a background of traditional, cultural, religious and social mores. Thoba regards the breakdown of these traditions as ‘spiritually dangerous’ and adopts an obsessive stance to what he seems to regard as ‘abnormal’ government in the new South Africa.1 Whether these concerns will deepen and drive him towards even an even darker introspection remains to be seen.