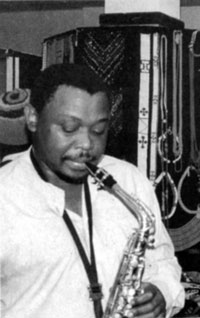 Trevor Makhoba’s art is uniquely grounded in his experience of life and contemporary events in KwaZulu-Natal. He reflects on this experience, as Andy Mason has noted, with elements of the satirical ‘that combines social realism with the surreal’.1Another recent observation on his work locates it within the traditions of black art in KwaZulu-Natal, as an extension of the work of Gerard Bhengu (qv.) for example, as ‘the persistence of a romantic realism’ that reflects a “popular language that is accessible and lucid”.2 At the same time his work is a good example of how black artists have left the ‘struggle aesthetic’ behind them and embraced current issues, dealing with the realities of a highly complex and diverse multicultural society. These new themes are well-reflected in the many examples of his work in the Campbell Smith Collection, ranging from gender issues and sexual taboos to HIV/AIDS, recent history and the spiralling crime rate in post-apartheid South Africa. The strong tendency to narrative in his art is rooted in what Juliet Leeb-du Toit refers to as ‘contemporary oral discourse which functions as a vital vocabulary that relates cultural, political and personal experience’.3

Makhoba seems to have inherited his artistic talents from his mother who was a school teacher who also drew and painted. Her encouragement and guidance were all that he received in terms of art training, and he was ultimately largely self-taught as an artist. He was educated at several schools at Umlazi, where his family moved to live in 1964. He did not complete his matriculation and left school to follow a variety of jobs, ranging from being a prison warder, insurance representative and working for companies like I & J Fisheries and the Dunlop Tyre Company. Besides his artistic interests he also developed his calling as a musician, playing the organ and the saxophone. He formed a popular gospel music group known as The persuaders and made money by performing at weddings and funerals.

In 1987 Makhoba made the decision to focus full-time on his art and began hawking his paintings door-to-door as well as on the Durban beachfront. Here he had a number of scrapes with the law. He struggled to make a living until 1990 when he was advised by a friend to show his work to Jo Thorpe at the African Art Centre in Durban. This proved to be a major turning point in his career, for with Thorpe’s help his work was promoted more professionally and his status as an artist rose almost immediately. Assured of a better income and not having to market his work on his own, he was able to devote more time to painting. His command of the oil technique advanced a great deal. Between 1990 and 1994 he broadened his skills by attending workshops in printmaking under Jan Jordaan and Marlene Wasserman. In 1994 Makhoba, on his own initiative, launched the Philange Art Project in Umlazi to benefit about 18 young artists by providing materials and training for them. The name was derived from his own Zulu name Phila, meaning ‘live’ and nge (with) art. The impact that his work and success have had on a younger generation of artists is well-illustrated in the Campbell Smith Collection in the cases of Sibusiso Duma (qv.), Sithembiso Sibisi (qv.), Joseph Manana (qv.) and Themba Siwela (qv.).

Bruce Campbell Smith was on very familiar terms with Makhoba, and this enabled him to make some impressive acquisitions for his collection. Campbell Smith has written a personal account of his dialogues with Makhoba, during which he was able to garner important information about his art and life. In this process stories about his childhood emerged which give deeper insight into Makhoba’s processes as an artist. One of these involved the fact that he was an epileptic as a child, and that in later life he sometimes experienced ‘altered states’ or events which were ultimately reflected in his art.4

Campbell Smith’s own assessment of Makhoba’s artistic importance is worth noting in the context of his collection:

As a painter, his artistic contribution to the milieu in which he lived is immeasurable. In my opinion, this painting tradition was started by the pioneer artists of KwaZulu-Natal such as Simon Mnguni, Arthur Butelezi and Gerard Bhengu. Trevor often worked in a similar idiom to these early Zulu artists, a fact which needs to be confirmed and which warrants further exploration by researchers … Whereas the pioneer artists illustrated rural themes, Trevor extends that tradition by introducing urban imagery into his paintings, often joining the former with the latter. He celebrates Zulu culture much as those earlier painters did, but with a zest that adds an extra dimension to his art, and which consequently elevates it.5

One of the achievements of ReVisions: Expanding the Narrative of South African Art was to exhibit and publish a substantial amount of the work of the late Trevor Makhoba for the first time. This is not, however, to detract from the achievement of the Durban Art Gallery in publishing valuable information on the artist – without illustrations – in 2005 after legal wrangles wrecked their effort to mount a substantial retrospective of his work in 2004. Bruce Campbell Smith had known Makhoba personally since 2001 and had encouraged him in his work at crucial moments. Campbell Smith’s account of his patron- artist relationship with Makhoba was included in the Trevor Makhoba Memorial exhibition catalogue issued by the Durban Art Gallery.1

Makhoba’s Gumboot dance in the old mine (plate 44) was painted after he and Campbell Smith visited the Killie Campbell Collections at the University of KwaZulu-Natal after their initial meeting in Durban in 2001. Although the Campbell Collections had acquired a number of his works, Makhoba had never visited the institution before. An earlier version of a Gumboot dance painting was displayed there, and Campbell Smith’s enthusiasm for it led Makhoba to assume he had a commission for another version, which he subsequently painted for his new patron.

Gumboot dance in the old mine illustrates one of the major cultural developments on the South African gold mines during the apartheid era. Black miners often worked in the dark or dimly-lit shafts for lengthy periods at a time in dangerous and unhealthy conditions. Standing for long periods in polluted underground water caused skin ailments. It was soon realised by the big mining companies that it was in their interests to provide the miners with Wellington boots to prevent disease. At the same time this convenient solution saved them the expense of having to continually pump the shafts dry. The miners used their boots as a form of communication not only by slapping them but also stamping their feet. This led to the development of a form of dancing that has now become a cultural phenomenon drawing enthusiastic audiences.

Campbell Smith’s dialogues with Makhoba deepened in the last two years of the artist’s life, the artist often giving the former some insight into the mysterious content of some of his paintings. This was the case of the nightmarish and bizarre Bamphonse ngamasele (It’s about witchcraft). Makhoba explained that in terms of Zulu superstition, if a man is in love with a girl and he is spurned, then he could go to a sangoma and have a spell cast in terms of which which frogs will come to torment her until she comes around to accepting his advances. This work, like many others that Makhoba painted, deals with the persistence of such beliefs and how they intersect with modern life. A number of Makhoba’s works also deal with his memories. Forced removals (Cato Manor) (2001) (ReVisions, plate 300, p. 316) deals with his childhood recollections of this apartheid outrage. His more nostalgic Amagendi kids recalls the game of this name played by the children of Cato Manor. This game involved the drawing of a circle in the sand. Stones were placed inside this circle, and also tossed in the air. The aim was to remove as many stones as possible from the inner circle before the airborne stones hit the ground.