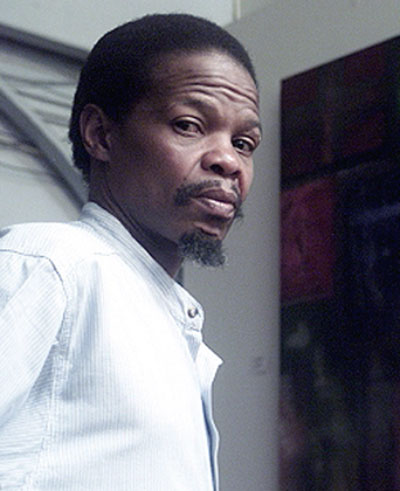 Fikile grew up in a politicised home. His parents and maternal grandmother were imprisoned in the 1960s and in 1984 Fikile was also incarcerated.

His father Arthur Magadledla, an avid reader, instilled in Fikile a lifelong interest in numerology. He allowed his toddler son to scribble-draw in his books. At the age of four Fikile was already addicted to art and one of the books, Pearson’s Fortune Teller by PRS Foli (1920) is filled with Fikile’s drawings. These drawings of human figures are remarkable. Instead of simple contours the outlines are multiple and jagged, foreshadowing the rich textures that characterise Fikile’s mature work. Pearson’s Fortune Teller remained in the artist’s possession throughout his life. Numerology is one of the topics dealt with in the book. Later in life Fikile became deeply indebted to the writing of the Nigerian poet, Christopher Okigbo and also The Trial of Christopher Okigbo by Ali Mazrui.

Fikile, the leading exponent of the principles of the Black Consciousness Movement in the visual arts in South African observed ‘Black Art is an important facet of Black Consciousness and Black artists are very conscious of their heritage’ (Black Art Today, 1981). Fikile focused on the beauty and dignity of people: ‘[…] there is one thing I believe in: if you draw the black man, he must be beautiful, handsome; the woman must be heavenly. Drape them with the most beautiful clothes – to wash away this whole shit of self-pity. […] I can undress a man – he must stand there naked – or undress a woman, and let her stand naked, but it’s all with pride and dignity’ (Staffrider 1980: 25).

In accordance to the call for self-assertion Fikile responded to Picasso’s signature by signing his own work by inverted writing and in 1976 he, Ben Arnold and the architect Piero Cuzzolini founded SOARTA (Soweto Art Association) when his exhibition was called off at the Goodman Gallery.

At the beginning of his career he experimented with a variety of mediums, including sculpture in terra cotta and gas concrete. Eventually he chose pencil because he considered it the most challenging medium. He saved the graphite residue after sharpening his pencils and later applied the ‘dust’ to required areas either by rubbing it onto the paper with his fingers or cotton-wool, achieving the characteristic subtle effects of his skies and clouds.

He also explained that he never questioned what he drew or painted; he merely transmitted inspiration which occurred like ‘a spontaneous combustion’. This procedure did not require preliminary sketches. Like Ezrom Legae, who encouraged him to practise art, he also found preliminary drawings stifling. He said his poems served as studies for his pictures. He believed that the essence of a piece was lost when the artist began to rely on sketches.

Though his imagery developed spontaneously, the execution of the art work seems controlled and premeditated. The rich textures of Fikile’s land and rock formations are achieved by patient mark-making and meticulous drawing evoking millennia of evolution. For him the dot is a significant element. He said a circle, the symbol of completeness, begins and ends with a dot. The line between these two dots completes a ‘journey’ when the two dots link up in a ‘big dot’. Moreover, he observed that he lost track of time while a drawing evolved. He often spent up to six months in perfecting a drawing. His deliberated mark making, exact and sound drawing undoubtedly inspired Thami Mnyeli and Ben Dikobe Martins.

The monumentality of Fikile’s images evokes timeless serenity. For him, life is manifested in the human body: the source of birth, death and rebirth. Hence: ‘Life is an eternal flow and inspires my art’.


Born 13 December 1950, Newclare, Johannesburg; died September 2003, Johannesburg. Training: In his youth he was a boxer, he left school in 1969 and his job in 1973 to become a full time artist. He had no formal art training other than what he learned from other artists and from attending art workshops. In 1979 he carried out a series of drawings to promote the film Freedom Road, starring Mohammed Ali. Collections: Gencor (now Billiton) Art Collection, The Ford Foundation, Johannesburg Art Gallery, Pretoria Art Museum, University of Fort Hare, Alice; UNISA, Pretoria; University of the Witwatersrand, Johannesburg.