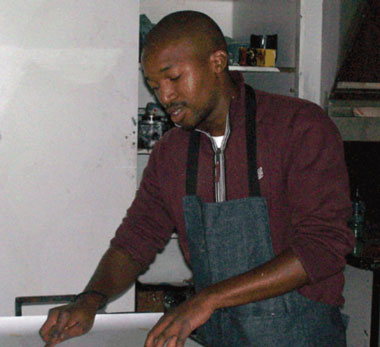 This is an early work by Mashile (plate 41), painted when he was only 20, some time between his completing high school and enrolling at the Johannesburg Art Foundation. As might be expected, it is a good example of a young artist’s struggling to come to terms with observational painting and the issues of naturalism. The immediacy of this painting suggests that it is observed from an actual scene. Although it shows a talented and deft handling of the brush, and Mashile’s confidence in handling broad planes of colour, there is some difficulty in handling scale, as can be noted from the quickly-articulated human figures when seen in relation to the buildings. In 1998 Mashile’s work shifted notably in new directions, becoming more ‘symbolist’ in nature; dealing with his issues and interests in traditional initiation rituals and male circumcision. These are in fact central to the life of young black men. These significant explorations, combined with a certain fluency in handling of the medium of painting, attracted enthusiastic critical attention. Mystical and natural forms replaced the more conventional and observational work of his earlier years. This is yet another example of Campbell Smith’s penchant for collecting the atypical and earlier examples of an artist’s work.