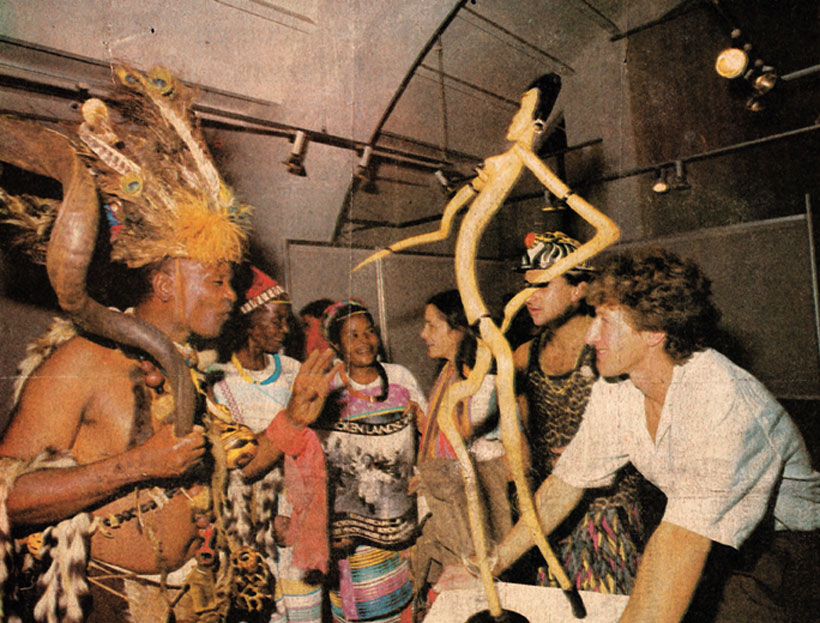 Before Nelson Mukhuba became a full time carver he worked as a migrant worker in Johannesburg on several different projects. During the 1960s he formed various Marabi dance bands and made recordings. Like all the carvers from the rural north who are represented in the Campbell Smith Collection he was untrained in a formal sense. His experience of the city appears in some works; for example, on the top of a walking stick he has carved a series of open rectangles, which according to him represent the shaft of an elevator. He also used images from magazines and books as source material and carved traditional items. Important among these are the large drums and the set of four figures – representing the four ages of women – made for the Venda girls’ initiation ceremonies (domba) (University of the Witwatersrand). He worked and lived in Tshakhuma, a German Mission station, and carved Christian subjects, such as the famous Nebuchadnezzar (Johannesburg Art Gallery) and Christ Crucified.

Movement and mobility in static sculpture interested Mukhuba and this is evident in the four works in the Campbell Smith Collection. For the dancers he used pieces of wood with the suggestion of movement, and then added mobile arms which could be articulated (see plate 252). He placed the whole on circular metal discs which functioned as bases and enhanced the idea of mobility. Before he was ‘discovered’ by the city art markets Mukhuba had a small shop on the main road between Thoyouandou and Pund a Milia, the northern gate to the Kruger National Park. To attract the attention of travellers he set up a large sculpture with a mobile arm tied to a string, which he would pull so that the arm waved to passing cars. The other way he explored movement was in his choice of subject – as evidenced in the two boxers in the Campbell Smith Collection; he also began working on the football theme long before its present popularity. Typically Mukhuba did not add anything to the surface of the completed sculpture, preferring a natural finish; only occasionally did he use pokerwork for definition.

Mukuba committed suicide in 1987; he set his storeroom alight and many of the works that survived bear the scars of this tragic event.

Nelson Mukhuba (left foreground) and photographer Gideon Mendel at the Out of Africa exhibition at the Market Gallery in 1986. Source: The Star, 17 March 1986. Photographer: Alf Khumalo.

Gavin Younge, who was familiar with Venda sculpture and Mukhuba at the time, later commented that Mukhuba’s ‘fame as an artist was no measure for his violence as a man.’ He also noted that the artist’s work [hinted] at the tragic and the psychopathic’.1 This delicate death-figure created by Mukhuba (plate 42) seems to reflect the artist’s prescience of his own tragic death by his own hand. Notably, it is not the only one that he made. The one shown here is similar to another entitled Death – the swimmer (1985) in the Standard Bank Art Collection held by the University of the Witwatersrand Art Galleries [1994.08].2 These works were made by combining two different approaches to sculpture in wood – the ‘found’ and the carved (See ReVisions, pp. 274-6). The torso and legs of the figure were made from a single piece of wood selected and fashioned by the artist from a branch that suited his purpose. To this moveable arms were attached by metal or wire. The skull itself was carved from a separate piece of wood and attached afterwards.